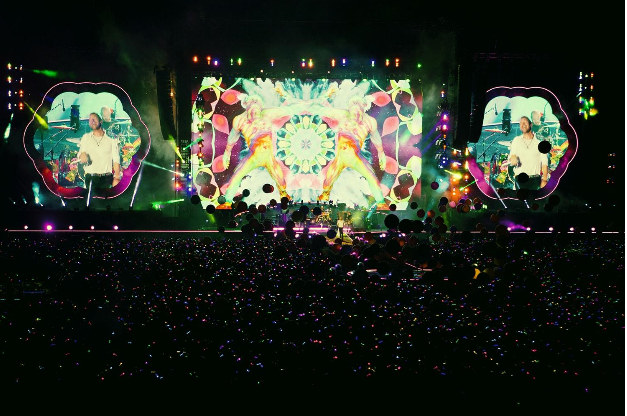 It’s always exciting spotting a celebrity, especially when on holiday and in a place you least expect it!

While you might not expect to see many famous people when visiting Devon, there are a fair few well-known names who hail from the beautiful South-West county.

It is not just gorgeous beaches, breathtaking coastline and rugged countryside that has put Devon on the map, but also a few famous people.

Read on to find out which Devonian residents have hit the big time – you might be surprised about some!

Lead singer, guitarist, songwriter and pianist, Matt Bellamy from Muse, grew up in Teignmouth, though was born in Cambridge.

He started playing the piano at age six and played in several bands while he was attending Teignmouth Community School.

While at school, he met his fellow Muse bandmates Dominic Howard and Chris Wolstenholme and went on to become one of the best-selling rock bands of the 21st century!

Chris Martin, the lead singer of the rock band Coldplay, was born in Exeter and is one of the most famous Devonians.

Martin went to school in Exeter before heading off for university in London, where he met his other Coldplay band members and formed one of the most popular British bands today.

Comedian Josh Widdicombe was born in London but grew up in Haytor Vale on Dartmoor, where he was one of just four people in his class at primary school.

Widdicombe has gone on to become one of Britain’s top comedians, had his own sitcom and is a presenter on the popular show The Last Leg along with Adam Hills and Alex Brooker.

Devon has produced some fantastic sportspeople, one of whom is boxer Tommy Langford.

He has won 20 of his 23 fights in his professional career!

Diver Tom Daley was born and raised in Plymouth, South Devon and was married in Devon too, at Bovey Castle.

Daley has been competing in diving competitions since 2002 and has gone on to compete at the Olympics, winning Bronze at London 2012 for the 10m and Bronze at Rio de Janeiro 2016 for 10m synchronised.

Sue Barker is a former professional tennis player and current television presenter who won fifteen WTA Tour singles and one Grand Slam at the 1976 French Open.

She was born and raised in Paignton and at age ten was picked for tennis coaching by Arthur Robert who had also coached a fellow Devonian Angela Mortimer who was ranked No.1 in 1961.

Barker was noted for having a powerful forehand on the court.

Born in Tavistock circa 1540, Sir Francis Drake was a sea captain, privateer, slave trader, explorer and naval officer during the reign of Elizabeth I.

In his youth, Drake and his family had to flee from Devon to Kent.

Another explorer hailing from Devon during the Elizabethan era was Sir Walter Raleigh.

He was noted as being the person who popularised tobacco in England and was also a writer, poet, politician and spy.

Though little is known of his birth, Raleigh grew up on a farm near East Budleigh close to Budleigh Salterton in East Devon.

It seems Devon has produced a few explorers over the years, one being Robert Falcon Scott, a British Royal Navy officer who led two expeditions to the Antarctic.

Born in Plymouth, Scott is considered to be the person to discover much of Antarctic, including Antarctic fossils, yet he sadly died on his second trip in 1912 just over two months after he reached the South Pole.

The famous writer Agatha Christie was born in Torquay in 1890 and spent her childhood alternating between Devon and London.

Christie is one of the best-known in English literature, having written 66 detective novels and 14 short story collections, and her work has been adapted for stage and screen numerous times.

You can find out more about Agatha Christie’s time in Devon when visiting Greenway, the holiday home of the author and her family.

If you are looking at hotels near Dawlish that provide the ideal base for exploring South Devon to see where your favourite celebrities grew up, the Langstone Cliff Hotel has all you need. Don’t hesitate to get in touch and find out more about our accommodation today.