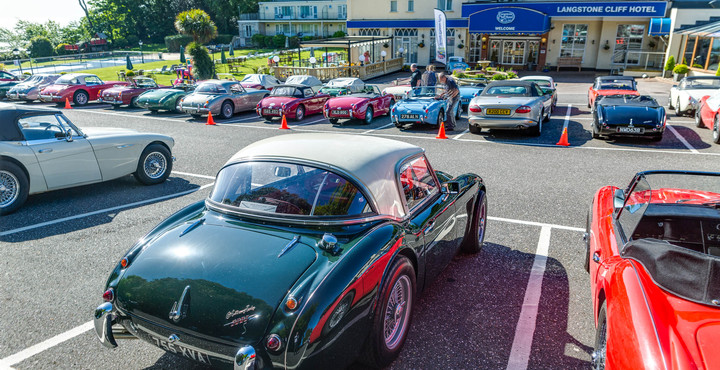 A Weekend with the Healey Drivers Club, May 2018

Here at the Langstone Cliff Hotel, we excel at hosting clubs and their special events…

Over the weekend of 10th to 13th May 2018 we were delighted to host Healey Drivers Club for a celebration – the Austin-Healey Sprite was 60 years old!

We always look forward to events such as these; more than 40 vintage Austin-Healeys assembled at the hotel including many Austin-Healey Sprites, Austin-Healey 100’s, Austin-Healey 3000’s and an extremely rare and valuable 1959 ex-works Sebring Sprite which won at Sebring in 1959.

The white over pale blue car registered UWD 97 is one of only two remaining and the only one with original parts from the 1959 win.

Events over the weekend for the members included drives to Dingles Steam Village, Beer Quarry Caves, Seaton Tramway and a short drive on Dartmoor.

We made sure that these events went off without a hitch, with dinner ready for our guests each evening for all the club members.

On Saturday evening, a live Skype session between Charles Matthews, Clive Baker and Mike Garton was hosted on stage in our Washington Suite.

With more than 100 guests and Sprite Legend John Sprinzel involved live from Hawaii, many of the members said it was a true highlight of the weekend.

For those who don’t know, John Sprinzel is a British former racing driver. He was renowned for competing in saloon and sports car racing and rallying.

He finished third overall in the inaugural 1958 British Saloon Car Championship season driving for his own Team Speedwell in an Austin A35. He won the British Rally Championship in 1959, driving an Austin-Healey Sprite and Alfa Romeo Giulietta.

In International events during 1960, he won his class at the 12 Hours of Sebring race and scored 2nd place overall in both the Liège-Rome-Liège and RAC rallies.

These successes were all achieved in Austin-Healey Sebring Sprites, a car he was instrumental in developing.

During the 20-minute session Charles, Mike and Clive discussed John’s career with Speedwell, the many cars he raced and his involvement with Austin-Healey and racing.

To have him answer such questions was thrilling.

They also discussed many other topics including John’s opinion of the current rallying, F1 and Formula E racing.

To round off the conversation, John proposed a toast, from Hawaii no less, to the Austin- Healey Sprite!

The Healey Drivers Club is creating a video recording of the Skype session to preserve the occasion, so if you wish to watch it, do contact them for information.

To round off the weekend on Sunday morning a Concours took place in the hotel grounds followed by lunch and presentations in the Lincoln restaurant.

“It was a pleasure to host Healey Drivers Club, and we enjoyed being part of their celebration. They are more than welcome to bring their cars and passion to Langstone Cliff anytime! I have to say that the provision of facilities for the Skype session and relay of the live conversation to the assembled club members was something we really wanted to get right. Not to mention the ample safe parking for all of the vintage cars within the hotel grounds.”

The facilities for the club shop, as well as the spacious lounges and comfortable bars meant that our hotel was able to accommodate the club members just as they needed so they could enjoy their weekend in comfort whilst sharing their common interest.

If you are interested in Devon, classic cars or just want a break, then be sure to contact us for further information about hosting or staying with us at the Langstone Cliff Hotel.

If you want to visit Devon, hotel deals don’t get much better than ours! Contact a member of the team for information today.

2018's Summer Jazz Weekend will be hosted by the one and only Jeremy Huggett and his incredible band making it one of the most sought after summer events in Devon. 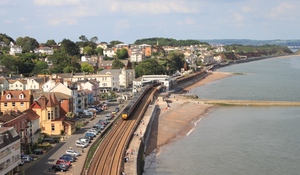 Guide to the Dawlish Arts Festival 2017

This year’s 65th Dawlish Arts Festival is set to be the biggest and most successful yet! As thousands flock down to the coastal town to embrace and enjoy some of the wonderful talented artists Dawlish and more widely Devon have to offer. 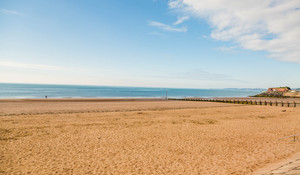 Our beloved local beach, Dawlish Warren, has been awarded the prestigious Blue Flag for another year!